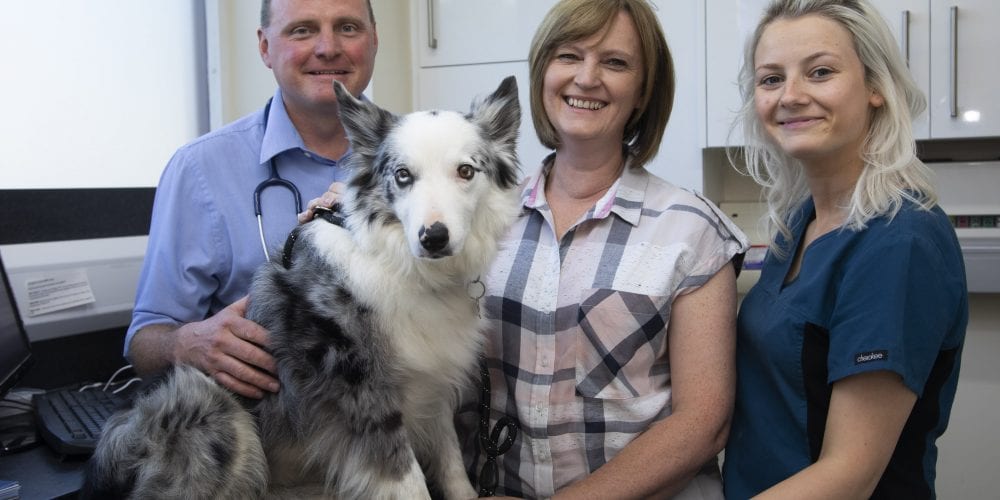 THE owner of a dog that cheated death after swallowing 22 maximum strength painkillers has thanked the veterinary team which helped her pull through.

Sasha the blue merle border collie almost died of a lethal overdose, but has astounded vets at Beech House Veterinary Centre in Warrington with her miraculous recovery after more than a month in their care.

Now her owner, Julie Hooper is keen to highlight the dangers of leaving medication within reach after her eight-year-old pet got into her son’s bedroom and sniffed out the packet of Ibuprofen

from his sports bag.

The teaching assistant from Padgate, who has had Sasha since she was seven weeks old, said she was told several times to prepare for the worst as Sasha’s long road to recovery was touch and go.

But the team at Beech House on Wilderspool Causeway, part of Willows Veterinary Group, went “above and beyond” to save her beloved dog’s life and were praised by Julie for their tireless efforts.

She said: “My 19-year-old son was away in Nepal doing some training to become a firefighter.

“While he was gone, I went into his bedroom to get some washing and opened his door and window to let some air through the house.

“I came home from work on my lunch break to check on Sasha, who was perfectly fine.

“But when I came home at the end of the day, I noticed she had been sick on the floor but I couldn’t find her.

“She doesn’t usually go upstairs but when I was looking for her, I also realised she’d been sick on my bed.

“When I found her, she couldn’t stand up and I didn’t know what was wrong.

“I took her straight to the vets and by the time I got there, she was virtually unconscious.”

With no idea what had happened, Julie left Sasha at Beech House while vets tried to get to the bottom of what was wrong.

And while Julie waited for news, she returned home where she made a grim discovery.

“I found a chewed up cardboard tablet box on the floor of my son’s bedroom and realised Sasha must have rooted them out of the side pocket of his sports bag,” she recalled.

“Because he was out of the country, I couldn’t contact him to ask how many tablets were in the packet, but I rang the vets straight away to let them know what I had found, naively thinking that they could pump her stomach or something and it would all be ok.”

But Sasha’s recovery was a lengthy one with vets worried about the impact on her organs and countless tests and scans were needed to save Julie’s much-loved pet.

Among those who treated her was vet of 22 years, Sean Cleary, who admitted it was the “worst case of Ibuprofen toxicity” he’d ever seen.

He said: “When Sasha came in, initially we didn’t know what was wrong and by the time we did know, it was past the point where we could give her something to make her sick or absorb what was in her stomach.

“By this time, the level of toxicity had caused a gastric ulceration, inflammation of the intestines and her kidneys were failing – she’d taken a large enough dose that would normally be fatal in a dog.

“Her kidney values were so high they were off the scales and her recovery process was very much up and down and we had to give her fluids and medication intravenously.

“But with perseverance from all of us, including Mrs Hooper who hand fed her when she wasn’t eating, she miraculously got through it.”

Mr Cleary who has worked for Beech House for 16 years added: “It’s not unusual for us to see animals who have swallowed human medications, some are sugar coated and the smell can be quite attractive to them so I’d urge people to keep tablets in a cupboard or somewhere out of reach.

“Mrs Hooper is an extremely conscientious owner and it was unlucky that this happened, if Sasha had eaten a tiny bit more, she almost certainly would have died.

“It was a very close shave for Sasha but she is completely fine now with no lasting damage, she’s very lucky.”

Reliving the ordeal, Julie said it was an extremely worrying and emotional time and she would spend many days in tears and willing Sasha to survive.

She added: “The staff at Beech House were fantastic, I can’t praise them highly enough.

“They were on hand to provide tissues and cups of tea when I would go in to visit Sasha and even had a chat group going so they could see how she was doing.

“Sasha is such a lovely-natured dog and everyone was just willing her to get better.

“We’re so lucky she’s still with us.”

Beech House is part of Willows Veterinary Group which offers a wealth of knowledge and expertise through a network of 25 small animal practices, a referral veterinary hospital, two equine centres and a seven-office farm practice, located across Cheshire and into Greater Manchester, North Wales, the Wirral and Staffordshire. It is accredited by The Royal College of Veterinary Surgeons.

Julie urged other dog owners to keep any medication locked away from their pets.

The mum-of-two said: “I think Sasha must have been looking for my son when she came across the tablets.

“I later found out that the packet of pills was a new one and that my son had only taken two so I knew that Sasha had swallowed the other 22 which was a massive toxic dose, even for a human.

“I could kick myself for leaving the bedroom door open and would desperately urge people to keep painkillers out of their pet’s reach.

“So many times we just put our handbags down without even thinking about it. It can happen so easily and I wouldn’t want any other dog or their owner to have to go through that.”

Meanwhile it appears that Sasha has forgotten about her near-death experience.

Julie said: “Sasha has been home for 11 weeks now and it’s like nothing ever happened.

“She’s back to her usual self, eating and playing as normal, which is the most amazing news considering how close we came to losing her.”

We will not have a Vet on the premises on Friday 30th July due to circumstances outside of our control. If you have a critical emergency, please telephone the branch for advice on what action to take from our Registered Veterinary Nurse who will triage your pet and if necessary, arrange for veterinary care from one of our sister practices. Our reception team will be available for all other enquiries and to collect prescriptions. We apologise for this inconvenience and are doing our best to find a solution to this situation.

Covid has had a huge impact on our sector which means that we have fewer appointment times and fewer vets to look after an increased demand for our services.

Whilst the majority of clients understand the measures we are taking to ensure we can remain open, a small minority are verbally abusing our team members.

This will not be tolerated, and, if we feel your behaviour is unacceptable, we reserve the right to end the telephone conversation or ask you to leave the premises.

Emergency care must take priority but we will, as always, do our best to help

Thank you for your understanding